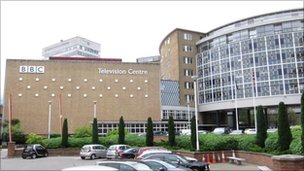 Many people are getting sad and upset about the imminent sale of BBC TV Centre in London. But I’m not.

Well ok, I’m sad for the Blue Peter garden, and it’s interred animals. Asides from that, though, BBC TV Centre is a big ugly 1950’s building down south somewhere. I never saw it, other than when it was on TV. I always thought it looked a bit like a hospital, and that big ugly brick wall that faces the main entrance never evoked any feelings of awe. It’s hardly York Minster, is it?

Frankly, as a kid the place didn’t feature in my life, even if the programmes made there did. And, if I may draw a comparison, I enjoy a glass of milk without feeling any fondness for the Arla foods depot in Kirkstall Road, Leeds. If you see my point.

As a kid, I was more saddened when Radio Humberside shut their old studios above the post office in Jameson Street, Hull. That’s because it featured as a part of my childhood. I knew that the nondescript first floor building was the home of Tex Milne’s ‘Country by Request’ and it wouldn’t be the same when it went. And, I guess some people feel the same about TV centre.

But not me. It’s just a building, and in the digital era of 2011 it’s a big expensive white elephant that eats my licence fee, when it could be far better spent improving the CGI effects on Doctor Who. Thanks for the memories and that, but ta ta, now.