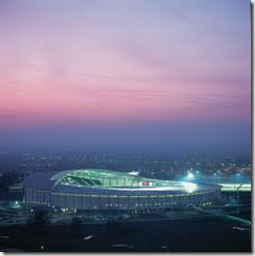 I don’t live in Hull anymore, but as I lived there for 34 years or so, what goes on there still interests me. Especially when it concerns sport in the city. I’ve always supported Hull FC rugby league team, and take a close interest in Hull City. So, when I see what appears to be happening regarding the KC Stadium, and the current owner of Hull City, I get concerned. Particularly for the future of my rugby league team.

A brief potted history of the KC Stadium, home of Hull City and Hull FC, may be in order here. It was built by the council using funds raised by the selling of council-owned shares in the local telephone company, and to this day is owned by Hull City Council. The stadium is managed on behalf of the council by the Stadium Management Company, or SMC, which has a 50 year lease on the ground.

Now this is not a perfect setup. It doesn’t make money. But it’s not meant to. It ensures that the City of Hull has an asset that is the property of the people who built it, and also, in my view, helps secure the clubs in it. Both clubs pay rent, and have no worries about the day to day running of the ground, such as stewarding, refreshment facilities, that sort of thing. The SMC look after that, so the clubs can look after the important things like players, fans, merchandise. Hull FC have posted profits for the last 6 years since moving to the ground. That tells me it’s a good setup.

The current issue concerns the owner of Hull City football club. Assem Allam is a self-made millionaire, who became rich by running a company to the west of Hull. When Hull City got into financial trouble following their relegation from the Premier league, he bought the club. All good so far. He has always maintained that this is due to wanting to help repay the city that helped him get rich. This may be true. I’m not convinced.

If indeed this were the case, I believe he would be quite happy to continue to rent the KC, and work with the council. Except he hasn’t. He wants to build a flash sports village, and to do this he wants to buy the stadium, with all its facilities and the fairground next door. If he can’t buy the stadium, he’ll shift the lot to Melton, near his business and several miles outside of Hull to the west. Melton is a rotten location for a football club, as no-one without a car will be able to go. It’ll also render the stadium in Hull something of a white elephant, tenanted only by the rugby league club and probably running at a loss to Hull City Council. Hull FC could not make the stadium pay on their own.

In short, then, it’s a threat. “I want the stadium, and if you don’t sell me it I’ll shaft you”. Not exactly the words of a benefactor. And, remarkably,  he’s changed his view of rugby league as well. On 4th March, he gave an interview in which he offered to buy Hull FC but only if the clubs merged, because he didn’t want to show any bias towards Hull KR, the other Hull-based Rugby League club. Yet, shortly after the council’s Liberal Democrat-run council lost power to Labour, he appeared at Craven Park with several Hull councillors and the East Hull MP, having invested £1million into the East Hull club. He claims the investment is because he realised “he had done nothing for the people of East Hull”. Except that he has, because Hull City are representing the whole city. Incidentally, he’s done nothing specific for the people of West Hull yet, because he doesn’t own the stadium, a point he seems to forget.

I wonder what really changed his mind? Seems to me like he’s seen an opportunity to butter up the newly elected councillors, who I would suggest need extra money to spend having promised the people of Hull that they won’t make the huge budget cuts the Lib Dems were threatening to make. Truthfully, I don’t know, I’m just guessing. But I know that the Hull FC fans in particular are dead against this on the RLFans message board. As tenants of Hull City, as we would be, there’s no way our club will get the equal treatment we currently receive. For example, what happens if both teams have a game on the same day? Guess who’s moving their game. It won’t be Hull City.

So, I believe this is bad for Hull. This is because it will sell off a facility that was conceived as a community facility for our two professional clubs, and the community at large. I believe that the extra facilities Mr Allam proposes, will be inaccessible to most Hull people because as a private enterprise they will need to run at a profit. I don’t believe Mr Allam will wish to continue the partnerships with Hull College, for example, as it’s not in his interest to do so. I believe that my Rugby League club will be disadvantaged, and seriously worry that the investment in East Hull paves the way to a forced merger of our clubs, as Mr Allam has already stated is his preferred option. I believe that veiled threats to move Hull City away from the stadium prove his lack of interest in being a city benefactor, as if this were to happen I cannot believe that Hull City fans would be happy about this.

See, I remember David Lloyd, who promised this and that, and eventually ended up almost bankrupting both hull City and Hull FC, and in fact locked the Tigers out of their ground. I forsee this happening again, for short-term financial gain. I believe the stadium needs extending, but not at the expense of putting our sporting heritage at risk again.

In short, Mr Allam, thanks for saving City, but you’ve done your job. If you really care, you’ll provide loans to the council to build the village, extend the ground, but I don’t want you to own the ground. The fact you won’t commit to the extension unless you own the facility tells me you are a businessman first, and actually you are looking for cash profits before being a benefactor. That makes you a liar. I can’t, therefore, trust a word you say.