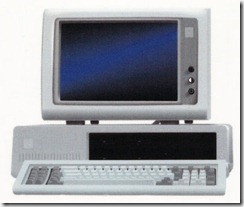 I got a new laptop last week. An exciting moment, for someone who loves gadgets, but after a week of using it, is it any good?

I have to confess, as far as PC’s are concerned I’m not their number one fan. That all goes back to the old days of computers. When my Spectrum got old and pointless, it was replaced with a CBM Amiga A500, which at the time was about a million years ahead of the PC in terms of usability and hardware specification. Amiga’s had a palette of over 4000 colours, had stereo sound (sort of), and a multi-tasking operating system. By the Amiga 1200, this had improved significantly, and was streets ahead of Windows 3.1.

Ah, Windows 3.1. What a badly written, unusable, pointless pile of old trollop that was. Microsoft daren’t make it any good because Apple kept taking them to court over any remote similarity to their Mac operating system. I was forced to use it at university, when actually it was easier to ignore it altogether and use the command line interface of MS-DOS.

Of course, things improved. Windows 95 was OK, if unreliable, as was 98. Windows ME was more reliable, but a bit dull. Then came Windows XP, which was big, clunky, but reliable and usable. By then, my Amiga was using up garage space, and Windows had taken over in my life, begrudgingly. In fact, a couple of years ago I discovered Linux, and have been using this in preference.

However, time moves on. In our house, there are 3 PC’s. One is an elderly desktop that runs Ubuntu Linux. One is an even older laptop, that is held together with string and runs Xubuntu Linux – just. The third runs XP, and Kubuntu Linux. They are all old, slow and barely keeping up, so it was obvious that they had to go and be replaced. Therefore, last Monday, off to PC world I went, spent an hour looking at PC’s, and came home with a spanky-new Dell laptop. With Windows 7.

Now, Windows 7 is something that’s passed me by a little bit. All I really know about it, is that the TV adverts are stupidly irritating (“I’m a PC, and I’m out of time”, “I’m a PC, and my work here is done”, “I’m a PC, and I need a swift punch in the face”). I’ve not seen it, not used it, not bothered with it. But, here’s the thing. It’s excellent.

Ok, it’s still a Microsoft operating system, so it insists on updating itself at the most inopportune moments, as well as constantly popping up warnings every time you want to do something. It’s the Labour party of the computing world, it wants to manage your entire life. It knows best. But asides from that, it’s so much better. It boots up far more quickly than XP, although it’s still quite new so we’ll see how long that lasts. It looks excellent, nothing like Windows in fact. It’s far easier to pick up than it ever was. I’m a big fan of the dock at the top of the screen, all the main programs I use are stored there as opposed to in a menu somewhere. Mind you, that’s a straight Mac rip-off, and I’m amazed they’ve been allowed to keep it in!

In short, it’s actually usable. So, I’ve put off installing Linux for now. I’ve even kept with Internet Explorer for now, because it’s actually quite good. The Windows Live Writer is included, and I’m using it to write the blog today. Yes, it really does come with rather nifty blog writing software. Whether it’s any good, well we’ll see when I hit ‘Publish’!

So, finally, let me recommend two pieces of software you’ll need  to finish the Windows 7 experience. Firstly, there’s no Outlook Express for your e-mails, so you’ll be needing Mozilla Thunderbird. Easy to use, works the same, totally free. Secondly, you will want a music player. ITunes works, Windows Media Player is included and is ok, but you really, really need to look up ‘Spotify’. It’ll play your old back catalogue of MP3 files on your hard disk, but it basically lets you – legally – stream music from online, and the range of bands and artists signed up to it is huge. The free version has adverts, if you don’t want that it’s a fiver a month, and to use it on your mobile it’s a tenner a month. Have a look, while I go and enjoy the glorious weather!