Ilkley. With a hat. 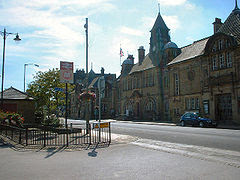 I've started working in Ilkley. On Monday morning, I set out on my moped, 30 mph maximum over the top of the hills, via Bolton Abbey, and arrived in a state of near hypothermia. If anyone can advise of ways to keep warm on a moped/motorcycle, I'm all ears.

So, the trip across has some incredible views of the Yorkshire Dales, but ends in Ilkley. Which to be fair, is a place I've never visited in my life, and know nothing about. Except for 2 facts.

1) it's next to a famous moor, as in the song 'Ilkla'Moor Baht Hat', which is, apparently, the unofficial Yorkshire anthem. The people who say this, I suspect, believe Yorkshire finishes at Leeds, because in Hull it's not an anthem of any sort.

2) Alan Titchmarsh was born there.

I've researched Wrongipedia, and learnt that it's built on the site of an old Roman fort (Olicana) and hence, people from Ilkley are known as Olicanians. It was mentioned in the Domesday book. It also used to have railway connections to Otley and Skipton via Addingham.

But truthfully, that's irrelevant, because I'm far more interested in the current state of the town. As someone who deals with the general public in a financial capacity, I'm more bothered as to whether they'll greet me with a smile or a punch in the face. And I'm pleased to report, as indicated by the presence of a Betty's tearoom, that the place is actually very nice. It's one of the tidiest, well-kept places I've ever been to, and it's clear that people actually seem to care about their town centre.

It's also full of old, rich people. The two things may not be unrelated. Old, rich people are good, because they are unlikely to shoot me. However, they are very demanding, don't like change, hate advice, which they see as being told what to do, and require all information in hard copy at least 3 times before committing to anything. But it's a challenge, and it should be interesting working there. Assuming I don't freeze to death on a moped getting there, of course.

So if you are in the local area, I recommend hanging around for an hour or so. But, stay away from Betty's unless you are incredibly wealthy, and don't sing about being on a moor in a state of hatlessness, because I have discovered that they don't find it so amusing.
Posted by Chris A Tye at 8:16 am