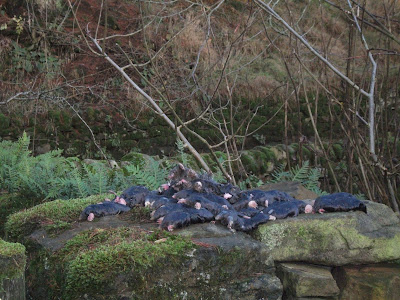 Here's an interesting picture, I took today whilst walking near where I live. I don't think it's particularly gruesome, but I can see some people wouldn't like this much.

I thought it important to show it though. I've never seen anything like it in my entire life.
A pile of dead moles is certainly not something you'll ever see outside BHS in Hull city centre, that's for sure.
I reckon there are three ways you can look at this.
1. You can be utterly disgusted with the disregard for the lives of animals, and complain loudly about the welfare of innocent creatures being slaughtered in this way.
2. You can accept that moles are a nuisance to farmers because they ruin meadowland with their molehills, hence reducing the amount of grass available to feed their stock during the winter months, and putting their livelihoods at some risk of being financially affected. They are stacked up for future use elsewhere, possibly falconry, or such like.
3. You can suppose that country folk are barking mad, and no other sane person in the entire world would even consider stacking up dead moles on a fencepost next to a public right of way, in this manner.
I fall somewhere between 2 and 3, although sympathise with 1 a little bit. If you stacked up dead rats in this way outside Tesco, there'd be complaints for sure.
I'll be off out again tomorrow, and I'm hoping to find some tap-dancing red squirrels. You'll be the first to know if I spot any.
Posted by Chris A Tye at 2:23 pm

Labels: dead moles in a pile