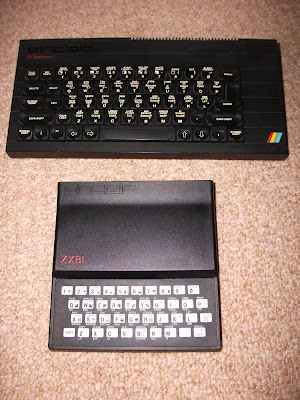 I'm about to go off on a huge nostalgia trip, for which I'm not even going to apologise. But if all this reminiscing about the past winds you up, you'll hate what's coming.

Still here? Excellent. Take a look at the picture above.

They're both mine, I rediscovered them during a recent clearout. For those who don't know, the one at the top is a Spectrum+ 48K. Below it is a ZX81. Somewhere in the garage, I have an original Spectrum, complete with rubber keys.

The ZX81 is older, but I guess the Spectrum is the most important of the two to myself. It started life as a rubber-keyed 16K model, was upgraded to 48K, and had the improved keyboard added later still. It had 8 colours (16 colours technically - light and dark shades of each!), which improved on the ZX81 which was black and white, low resolution, 1K memory, and no lower case characters. Plug the Spectrum into the TV now, and it still fires up the start screen, although the keyboard refuses to accept any input which I reckon is because the Kempston joystick interface was faulty and killed the rest of the computer. (The ZX81 works, but you need a particular type of old TV with manual tuning, and the wind needs to be blowing from the north-east at exactly 14.3 MPH. Its temperamental, to say the least!)

Possibly, none of the above paragraph made any sense to you. It made no sense at work on Wednesday, when I was trying to explain what this machine was, to no avail until someone piped up 'It was an old games console'.

Which I guess it was, kind-of. If that's what you wanted it to be. But it was more than that. It was programmable, and it let you write your own games if you had the time and patience. With the right adaptor, it let you write letters and print them out. Clive Sinclair, who owned the company that invented and sold these computers once claimed that the ZX81 could run a nuclear power station. Doubtful - the add-on memory module reset by moving it, so one knock and we would be clearing up nuclear fallout for decades.

The thing is, during the 1980's you had two options in life. People wax lyrical about 1980's music, but between 1983-1989, I can't really place many songs. That's because instead of visiting school disco's, I was sat in my bedroom, destroying my eyesight on a black and white telly, writing pointless programs - or even worse, copying them line for line from magazines. Copying computer programs was long-winded, laborious, but when the program failed to work you could learn an awful lot about programming by trying to de-bug your 6 hours worth of typing.

When I did my A-level in computing, I had to adapt to other programming languages. But, this was stupidly easy for me because I already knew the basics. Later during my HND, I picked up Pascal programming far easier than about 50% of my year, because I'd already learnt most of the techniques. Still now, I can implement IF..THEN..ELSE statements in Excel spreadsheets. So, during the 80's when everyone bought their kids computers without having a clue what they did, or why, under the pretext that 'it'll help with their homework', I guess it really did help with mine. It probably help me avoid a lot of homework too, I 'lost' an awfully large number of books at school due to homework not being done, because I'd been up until 2am attempting to get Bilbo Baggins out of the Goblin's dungeon.

Of course, with modern PC's and Internet access, computers really do help with homework. Computers are now a tool, and pretty much anyone can use one because you don't normally need to write your own program. It also helps that computers generally work together - it's a choice of Windows/Linux PC, or Apple. In 1982 when the Spectrum was born, there were numerous computers, and none of them were compatible with each other. BBC. Oric-1. Dragon 32. Commodore 64. Jupiter Ace. Even computers made by the same manufacturer were incompatible. The two computers above had similarities, but just because Sinclair made them doesn't mean the older programs worked on the new computer!

These computers were all but dead by the 1990's, and the replacement Amiga's/Atari ST's that replaced them where far, far more advanced and useful, setting the platform for today's modern computers. I moved to an Amiga because my friends had them, as I got a Spectrum because most of the people my dad worked with had them - attitudes to pirated software were lax compared to today.

Anyway. Enough reminiscing, but if you've never seen this, I guarantee it'll bring back a flood of memories for any other saddo's like me. Granted it's been around for ages, but I still like it. And if you want to relive your Spectrum experience, well there are a load of emulators here.
Posted by Chris A Tye at 10:09 am