A grand day out 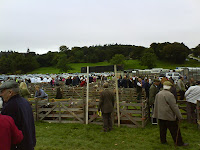 It's nice to type up a blog entry about something I actually enjoyed, rather than the usually whinging that seems to have become a habit of mine recently, but yesterday I had a day out with Mrs B at the annual Nidderdale Agricultural Society show. And, I have to say, it was a bloomin' good day out.

Last year, the 2008 show (held in Pateley Bridge) was my first ever visit to an agricultural show. The Nidderdale show is held 8 miles down the road from where I live, so is quite an important event in my hamlet and around the local area. In fact, the Nidderdale show attracts entries from all over the country, in part because it's the last show of the year, and therefore the last opportunity to display your animals before they go away for the winter. It's also a good excuse to get together with like-minded people, and discuss farming matters. I enjoyed it as a day out, but some of these people I suspect rarely meet anyone on a day-to-day basis, and the show is a real chance to get together that rarely happens in the hill farming communities.

I went to the Great Yorkshire Show earlier in the year, but didn't really enjoy it, mainly because it was so big. There didn't feel like any local input, there wasn't anything there I could properly relate to. That's not true of the Nidderdale show. It's like a very big, very well organised village fete. I got the tickets from the farmer 3 doors away, who helped organise it. The bloke from down the road was stewarding the sheep. The lady next door had entered about a million things into the handicrafts section, and from last years successes, she probably expected some decent prize money as well!

Anyway. The only disappointment of the day was the non-attendance of the 'White Helmets' Motorcycle Display team due to swine flu, although the chap who replaced them was pretty impressive - jumping off ramps on a quad bike isn't something I would recommend you try! The animals were all turned out exceptionally well, and there was a particularly good turnout in the sheep classes as you'd expect in a predominantly sheep-farming area! The food tents were OK, but a few more wouldn't go amiss - an opportunity to promote local produce was probably missed here. And of course, there were some unfeasably large vegetables winning prizes in the food tent.

You may also remember this post, suggesting Janet Street-Porter got off her butt and offered more support, after her measly £5 donation last year. Well, I'm pleased to report, having perused the 2009 catalogue, that she entered chickens and pigs into the various categories. I've no idea whether she won, or indeed if she was there, but a large pat-on-the-back is required. I entered nothing this year, to my disgrace, although I've earmarked the categories which will receive my patronage this time. You should come along and see them for yourself!

Nb. I'm not sure how many prizes my neighbour won, however I can confirm at least, that she won in one out of the four flower arranging categories AND took the prize for the best display in all four categories. Pretty impressive, I'd say!
Posted by Chris A Tye at 1:55 pm