This goes on in the 21st Century 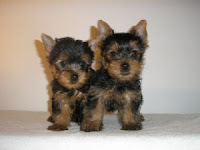 I'm keen on keeping this blog neutral. I believe people can make their own minds up about things, and what I write here is my personal opinion. But I'm making no apologies for being a bit partisan on this one, because it's got me riled.

I don't profess to be a dog lover. I find dogs similar to children, in that they demand constant attention, can't be left on their own for long and require cleaning up after themselves all the time. Maybe your dog is different, but I tend to find it's the general theme. And like children, I can generally tolerate other peoples dogs for short periods of time, as long as they go away again quite quickly.

Well maybe I'm being a bit harsh! But dogs do require looking after. It's part of the deal when you get the dog. You feed it, walk it, keep it healthy, and give it fuss and attention. If you do this, your dog will be a loyal companion for life. By and large, I expect most people do this. Unfortunately, it's not always the case, and as such organisations like the RSPCA will always be around until people accept that mistreating your pet is unacceptable.

I don't believe you can separate child abuse from animal abuse. I'd suspect that people who mistreat animals are of the same mindset of child abusers (and it appears others think the same). Children have no voice other than their parents. Animals have no voice either. In fact, children have a chance of growing up and gaining a voice, which can deal with the issues in later life, whereby animals never do. It's utterly unacceptable in both cases. I suspect animal abuse probably offends me more, personally, because I have no children, and people I know who have children all, quite rightly, become very 'child-first'.

Therefore, when I saw this report on Sky News on Tuesday night, you can only imagine how disgusted I was. I genuinely cannot believe that in 2009, there are fully licensed puppy farms, keeping intelligent creatures in small pens, permanently indoors, never seeing daylight. Never seeing any light it would appear, as the lights were off and there were no windows in the large shed the dogs were in. Some dogs hiding in the corner. Some dogs pacing through boredom. Some animals with puppies, one of which appeared lifeless. Fully licensed by the local authority. It's actually not illegal to do this.

The puppies at least get a fighting chance of eventually having some quality of life, unlike the mothers' who are allowed to do nothing more than breed continuously. That's assuming that the puppies don't have any physical or psychological problems. The report spoke to people whose dogs became ill, and didn't last 4 months. The dogs from these farms are sent to pet shops, who charge ridiculous amounts of money for these animals. The report featured a particular store, 'Dogs 4 Us' with branches in Leeds and Manchester, though I expect there are similar stores throughout the country. I would guess that Sky News took an interest in these stores because they have pictures up of the famous people they've supplied, including Wayne Rooney.

Well, I believe that dogs aren't like a tin of beans from Asda, and pet shops aren't the place to buy them. I reckon pet shops should sell pet accessories, and leave the pets to registered breeders, who can vet the buyers for suitability to own a dog and show you the mother and puppies together, so you know they've had some sort of quality of life. I'm sure that in the 21st century, puppy farms should be closed down, in the same way that supermarkets stock eggs from caged hens less and less, as people's awareness of how animals are treated changes over time.

The RSPCA agree. I don't always see eye to eye with them, but when they campaign properly then they deserve our support - have a look here. I suggest you let your MP know. Most importantly, if you're wanting a dog then avoid the pet shop and follow the guidelines, because your dog is likely to have problems if it's from the wrong place. And finally, if you are considering buying a dog, don't go to a crummy little pet shop. I wonder if these dog warehouses walk the animals daily? Give them attention? It's like a dog zoo.

Zoos. There's another story entirely, and I'll save that one for another day I think!
Posted by Chris A Tye at 9:35 am