Can't we be friends? 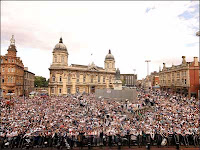 I see the new fixture lists are out, for the football season. Excellent. Hull City's first match, Chelsea. Man Utd on boxing day.

I'm glad. Honestly. Well ok, I'm not too fussed. Football interests me to the extent that I love to see City doing well, and I was as happy as anyone when they avoided relegation last year. But to claim I'm their number one fan is a lie.

My mother was brought up on Hessle Road in Hull, and her house was about 30 seconds walk away from the Boulevard, which any sports fan will know is the former home of Hull FC, the super-league club to the west of Hull. So, that's what I was brought up with, and that's what gets me going. Sure, I've been to Boothferry Park, and had a great time. I saw Dean Windass put the Tigers in the lead against Bradford, before getting sent off. I experienced Duane Darby scoring a last-minute equaliser against Whitby Town in an FA cup game - 8:4 final score. I even endured 90 minutes of misery at Huddersfield Town's old Leeds Road ground, in a 3-0 defeat. Yes, those games live long in the memory.

But for me, it was all about the black and whites. Greg Mackey's bomb in the 1991 Premiership semi-final that led to the winning try. Cardiff 2005. The old threepenny stand, and being told by the tannoy-bloke not to jump around in it because it might collapse. Getting threatened with eviction at Featherstone, for flicking the V's at the home fans (who were doing far worse to me!) The advertising hoardings at Keighley giving way, resulting in 1 broken leg and a week of - undeserved - negative press. The goalposts coming down at Huddersfield, and the sickening trip home knowing what the rugby league world would be saying, and the chief executive standing amongst the away fans at Warrington in the very next game, to prove a point that he was on our side and a few morons wouldn't result in him letting down the majority of decent sports fans.

Because that's what sport is about. Not just the results, but the experience, good and bad. Sure, I was happy the day Hull City won at Wembley, but I'll bet the people who were there, and have been there for many years, were in another place that day. The nervous night before, the trip down, the game, the journey home, the open-top bus, the pub on the night. It's all part of being a fan. I've never experienced that with City. I've been there with Hull FC.

Ultimately, though, just because I'm not the Tigers' Number one fan, doesn't mean to say I can't wish them well. We share the same ground, we come from the same city, but for heavens sake we are different sports. Hull KR play the same game as FC, and there's no way I could ever wish them well, but that's an obvious rivalry. Hull City are different. So I despair when I read comments on the Hull Daily Mail website, like;

"These eggchasers dont like football and Hull City getting any headlines do they? Makes a change from rugby league players appearing at court though you must admit."

This dumb little war has been going on for years, and is worse since we both moved to the new ground. And I'm not going to take sides, because frankly, both football and rugby fans are as bad as each other. It's truly pathetic. Obviously, football gets bigger crowds. Obviously, some people prefer rugby. Makes no odds to me. I just can't get my head around why people can't follow both games if they want.

So, for the record. Good luck to the Tigers next season, and for crying out loud FC, sort your sorry backsides out - I'm sick of losing every week!!!!!!!