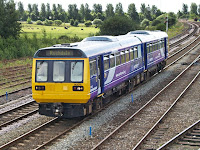 Now then. The picture above is of a British Rail class 142. Known as a Pacer. Train-spotters call them 'Nodding Donkeys'. By the way, for the record, I've not been a train-spotter for over 20 years now.

I have, however, been a rail commuter. And as such, I've travelled on an awful lot of trains. Class 170 Turbostars, as used on the trans-pennine routes to Hull. Hull Trains Pioneer class trains. Inter-City 125's. Class 158 Super-Sprinters. Some are better than others. But, in the world league of crap trains, the 142-class Railbus is, was, and always has been, by far the worst train ever to appear on the rail network.

Why are they so bad? Ok. They aren't really a train. To make one, you need a chassis, with an engine hanging underneath them. To save money, don't bother with the traditional method of fixing wheels onto a train, which is to fix the wheels on to a seperate 'bogey' and fasten them to the chassis. Instead, you stick a wheel on each corner. Then, you basically take a bus body and bolt it on to the chassis. Put together, a cab at each end, and Voila, one class 142 railbus.

The result is a bouncy ride, that risks inducing travel-sickness on every journey. Uncomfortable seats, with next to no leg room and no luggage space to speak of. Doors that rattle and let the wind in. Assuming you do reach 70 miles an hour (they aren't fast), the draught ensures sub-zero temperatures on every journey. And, if your train is more than 2 carriages long, you can't walk the length of the train because there is no connecting door.

The advantage, as you can guess, is that they are cheap. And in 1985-87, when most of the trains on the railway were 30-40 year old museum pieces, they probably looked like a good option. But in 2009, these things are over 20 years old, and the world is a different place. Train fares are higher than they've ever been, and safety standards have changed - in 1999, an accident in Winsford where an express train hit a (fortunately empty) class 142, proved the inherent dangers in bolting the body to the chassis - the body was sheared straight off. (link)

In North Yorkshire, these things are used on the Harrogate line from Leeds, along with some equally elderly Sprinters. This is a very busy commuter route, particularly between Leeds and Horsforth. The Skipton and Ilkley lines got electric cables and some very nice electric commuter trains. Clean. Reliable. Regular. On the Harrogate line, we get to use these deathtraps, with 20 years of accumulated dirt and grime. It's not unusual for these trains to leave people behind at Burley Park station because the train is so jammed full.

And that brings me to the whole point of this rant. Last night, I found myself sat on one of these things for an hour and a half, because it broke down. Two pairs fastened together, one of which had a brake problem. Not that the brakes weren't working, in fact quite the opposite, on one of the units the brakes applied and wouldn't go off again. I left work at 5, and got home at nearly nine o'clock. Considering that these things are so badly cleaned, it would seem that they are maintained to a similar low standard. If this was a one off, I'd tolerate it. But on the rare occasions I use the train, at least 3 out of the last 5 return journeys I've taken have had some sort of problem.

Bearing in mind that a season ticket is £123/month, I reckon that this is pretty poor, and it really shouldn't be so bad. Trains run to a set timetable, so as long as they are serviced properly they should be perfect. I like trains, they are quick, and unlike buses, they don't sit in traffic jams and don't stop every 500 yards to let people on and off. I would rather use the train.

But the alternative to this pile of old rubbish is the number 36 bus. For a start, it goes to Ripon, which the railway doesn't do anymore since Dr Beeching shut what would probably be a very healthy commuter line. In addition, the no. 36 bus is usually clean (trains take note), has leather seats upstairs, is regular (if a bus breaks down, it's 10 minutes to the next one, at peak time). And as importantly as all this, it's only £78 a month. £45 less than the train, for a better service. The £78 ticket, incidentally, lets you use any 'Harrogate and District' bus, any where, at any time, for no extra cost. The train ticket restricts you to Harrogate to Leeds.

Bit of a no-brainer, really. Guess how I'm getting to work tomorrow. At least, until the trains get some money spent on them. As that's not been the case for the last 40 years (excluding the wasted projects), I'm not holding my breath waiting.